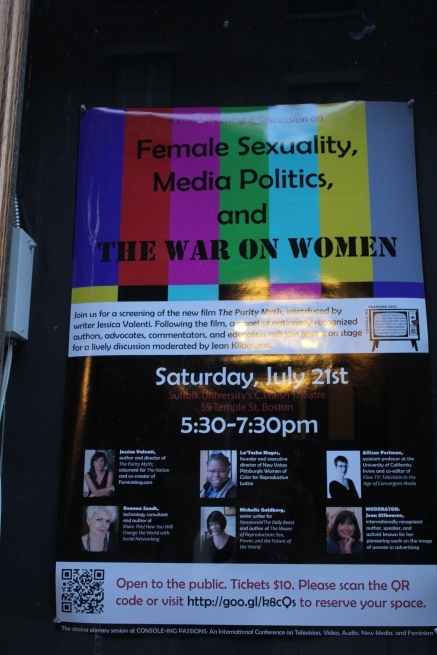 On a magical Saturday night, actually, my first night in Boston, I met a lovely girl in a cafe while looking for cream and sugar for coffee. She noticed my female symbol, ♀, necklace that I normally wear and approached, asking if I was a feminist. With great excitement I exclaimed, “Why yes, yes I am!” and she proceeded to question what I was up to that night. I commented that I had no where to be and what ever adventure she was likely offer sounded better than sitting through two and a half hours of the new Batman movie my friends invited me to, although I’m sure I would have had a good time…maybe. Katherine, as she introduced herself to me, slowly, curiously asked if I knew who Jessica Valenti or Jean Kilbourne were and if I had ever heard of the “Purity Myth.” As my eyes got bigger, she realized that she had a devoted feminist on her hands. We chatted excitedly as she told me that that night at Suffolk University, in Beacon Hill, there was to be a screening of “The Purity Myth” and that post-film, a panel of famous media researchers and feminists were to speak, as moderated by Jean Kilbourne. Jean OHMYGOD Kilbourne. Best $10 I ever spent.

Around 5p we hopped on the T subway and wound our way through the underground tunnels of Boston with their colored tiles and dimly lit terminals. After maybe twenty minutes we got off at Park Street and walked up manicured brick paths that met with cobbled streets. Thank God Katherine knew her way around since I would have never found the entrance to the theater we were headed to, tucked away on a quiet side-street.

We sneaked into the auditorium as the lights came down and the film began to flicker up on the screen. For almost an hour, I sat with close to a hundred impassioned feminists, men and women alike, as well as those who were just beginning their exciting self-education of the movement. At times we boo-ed and cheered and reacted as if we were at a football game, but that’s just what Jessica Valenti, sitting only a few rows ahead of me, wanted.

To sum up the story, Valenti, Dr. Allison Perlman,  Michelle Goldberg, La’Tasha Mayes and Deena Zandt offered a wonderful panel of experts from different fields, all focused on Feminism. Afterwards, I met them all and exchanged contacts. It was amazing, it was fantastic and I still cannot believe that I had this wonderful experience. Here’s to Boston, great stranger (*shout out Katherine!) and feminism.

And, last but not least, the next morning, I called up Nicole and told her about my awesome night the day before. Overjoyed, she, as I imagine, ran to our campus’ library and took out The Purity Myth, in book form. She claims to have read it in one sitting and I’m not going to try to argue that. Click here to read our joint media review of “The Purity Myth,” film and book.

JEAN KILBOURNE EMAILED ME. OH YES, OH YES SHE DID.

And she granted us an interview!

This will begin the prep-part of Fatal Femme’s “Famous Feminists Interview Series,” short conversations, in writing, audio or video, with feminists making a difference, whether they are world-renouned or beginning their quest. 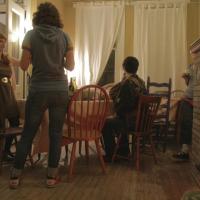 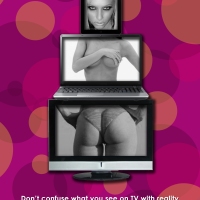 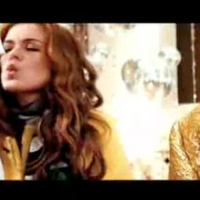